Kazakhstan has jailed a businessman for turning a profit, apparently because his sister is close to an exiled opposition figure. 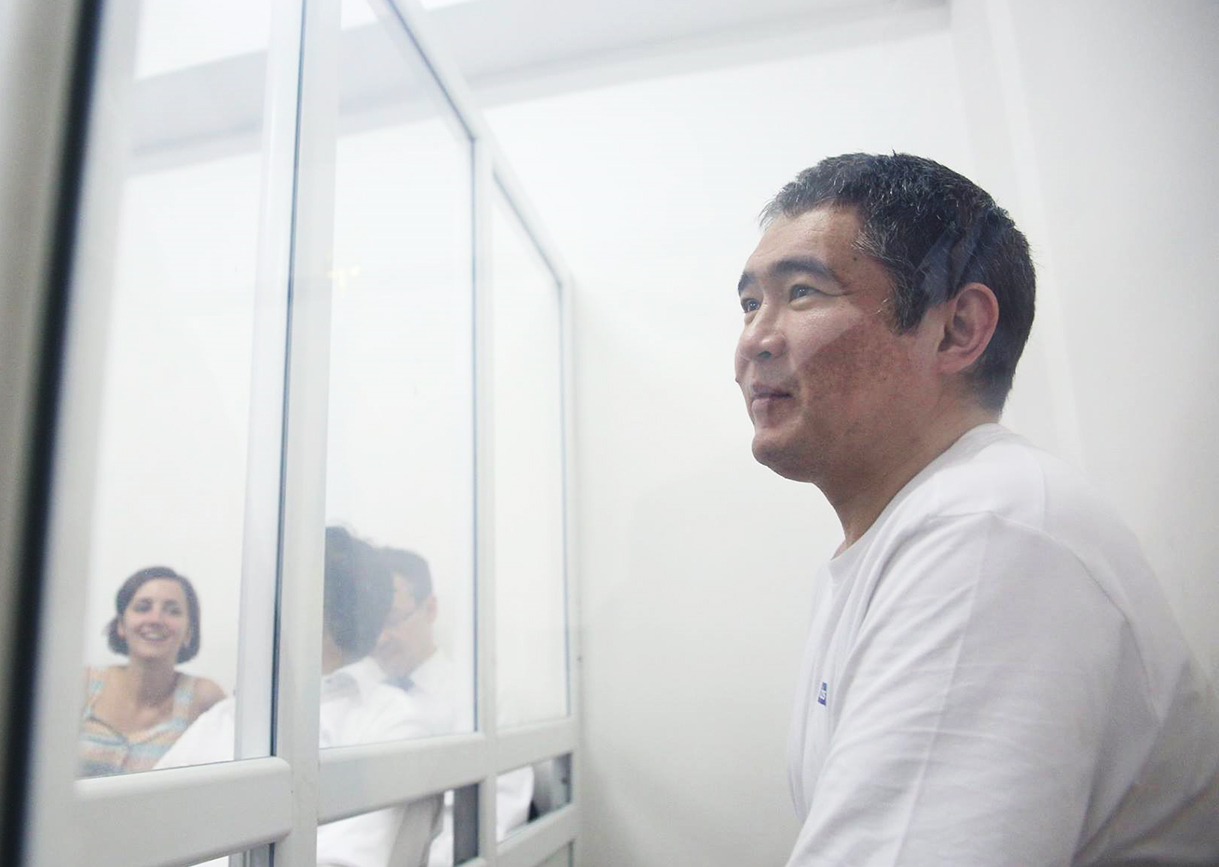 A businessman in Kazakhstan has been sentenced to seven years in jail for turning a profit. So say his relatives and supporters, who watched aghast on October 22 as a judge in an Almaty court made the ruling.

As prosecutors would have it, the trial of 47-year-old Iskander Yerimbetov, the founder of an aviation company, was merely about corruption. Scratching beneath surface, however, reveals a politicized affair that once more raises doubts about Kazakhstan’s willingness to transition into a modern, rules-based market economy.

Judge Taken Shakirov’s court descended into chaos after he read his ruling. Angry people in the gallery – Yerimbetov’s supporters – broke out into cries of “shame, shame,” as Shakirov beat a hasty retreat. 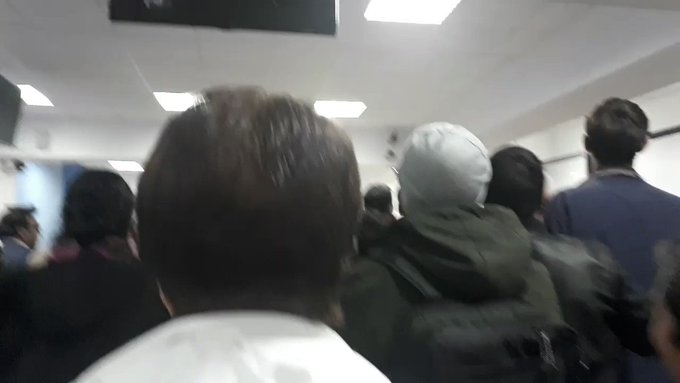 Yerimbetov’s mother, Gayni, decried what she called a “shameful travesty of a trial.”

It was a fitting conclusion to a trial tainted by ill-tempered exchanges and crude procedural violations.

Yerimbetov was arrested in November on suspicion of money-laundering. Investigators claimed at the time that he was cleaning illicit funds for one-time banker Mukhtar Ablyazov, a hardened Europe-based opponent of Kazakhstan’s government.

Yerimbetov denies having any professional or personal links to Ablyazov. There is a connection though. His sister, Bota Jardemalie, who has secured political asylum in Belgium, is one of Ablyazov’s lawyers. And that, for critics of Yerimbetov’s trial, was the only motivation for his arrest. They believe the businessman is in effect being held hostage to force Jardemalie to return to Kazakhstan and testify against Ablyazov, who is accused of an array of misdeeds, from grand-scale fraud to fomenting political unrest.

“Iskander is a political prisoner,” Jared Genser, an American lawyer hired by the Yerimbetov family as part of his defense team, told reporters the day after the sentencing.

The original money-laundering charge never even reached the courts. In a sudden change of tack by the authorities, Yerimbetov was presented in March with an unrelated set of fraud charges, for which he has now been convicted.

The prosecution alleged that Yerimbetov and three associates conspired to inflate the commercial prices of services provided by his aviation company, Sky Service, by 6-10 percent. In doing so, the company allegedly cheated local authorities in the southern Zhambyl region and six private companies who purchased these services out of 208 million tenge ($570,000).

The accusation left Yerimbetov and his defense team flabbergasted. They argued, in vain, that Sky Service had won the contracts through public tenders by simply offering competitive prices.

“Does a commercial company like Sky Service have the right to set its prices independently?” Yerimbetov, who made his fortune in investment banking and telecommunications before moving into aviation, said in his final appeal to the court. “There is no law against it.”

Human rights campaigner Sergei Duvanov likened the prosecution’s approach to trying market traders over the price at which they choose to sell fish.

“This is a purely political trial,” Duvanov said.

Gesner argued that the case sent a worrying message to foreign investors.

“Apparently, Nazarbayev doesn’t want foreign direct investment. Why would anyone invest here if no profit [is] allowed [to be made]?” he asked on Twitter. “Twisted & bizarre.”

Also convicted were company officials Vasilina Sokolenkо and Dmitriy Pestov – both sentenced to five years in jail. Mikhail Zorov, who had pleaded guilty, received a suspended sentence. Sokolenkо and Pestov had originally confessed but later recanted their testimony, saying that it was made under duress.

In his final plea to the court, Yerimbetov, a father of five, struck an impassioned and despaired pose as he sought to detail what he said was a systematic campaign of intimidation against him. He repeated claims he had, while in pre-trial detention, been beaten and mentally abused. His tormentors threatened to jail his father and son, to rape him and his son, to drown him in a latrine bucket and to stick HIV-infected needles under his fingernails, Yerimbetov and his defense team have claimed.

Authorities have explicitly denied all claims of such mistreatment.

When Yerimbetov put it to the court that he saw himself as a “political hostage,” he was interrupted by Shakirov, the judge, who ordered him not to make such claims.

Shakirov intervened repeatedly throughout proceedings to prevent Yerimbetov and his defenders from alluding to their belief that the case was politically motivated and linked to Jardemalie and Ablyazov.

But the authorities have form going after people even related only tangentially to Ablyazov, who is despised by 78-year-old President Nursultan Nazarbayev. And Jardemalie is a particularly ripe target.

Ablyazov has feuded with the government before. This ongoing disagreement began back in 2009, when the government seized his bank and forced him to flee to London for fear of arrest.

Jardemalie was intimately involved in some of the international legal troubles that followed.

Ablyazov first felt the heat from his former bank, BTA, which sought billions in damages for alleged fraud through a lawsuit filed with the London High Court.

That episode ended in a fiasco for Ablyazov. In 2012, after a judge in the United Kingdom ordered him jailed for contempt of court, he fled the country and was debarred. Subsequent court rulings ordered Ablyazov and associates to repay some $5 billion to BTA.

Ablyazov was later arrested by French police in a swoop on his luxury digs on the Cote d’Azur. He spent three years in a Paris jail battling extradition to Russia or Ukraine to face embezzlement charges. Jardemalie was busily engaged in that mammoth extradition battle.

Jardemalie also worked on the case involving Italy’s legally dubious deportation of Ablyazov’s wife, Alma Shalabayeva, to Kazakhstan in 2013. After a political storm that deeply embarrassed the government in Astana, the deportation was reversed and Shalabayeva was allowed to return to Rome.

Yerimbetov’s legal team have said they will appeal the conviction.

Genser is determined to take it even further.

He has written to Nazarbayev detailing 18 breaches of Yerimbetov’s rights under international law. These ranged from procedural violations and physical and mental abuse to the flouting of Yerimbetov’s right to a fair trial and the denial of his presumption of innocence, the American lawyer said.

Genser is also pledging to continue his campaign to get senior officials in Kazakhstan placed on the Global Magnitsky Act, a piece of U.S. legislation that would enable sanctions against people implicated in human rights abuses.

“We need the world to understand how this regime arbitrarily tortures [and] detains its real or imagined political opponents, by shining a bright light on Iskander’s case and those of dozens of other political prisoners in Kazakhstan,” he said.

Joanna Lillis is a journalist based in Almaty.